For the decades leading up to the post-WWII era, Canada's policy of immigration was one of closed doors. In many ways, it was one of exclusion, particularly during and after the WWI era (Stewart, "Postwar Refugee Movements"). During World War I, Canadian residents of "enemy" background were put in internment camps – notably an especially large number of Ukrainians (Roy, "Internment in Canada"). Later on, in the Depression era, immigration had been altogether frozen (Stewart). However, a combination of awareness raised by Canada's established immigrant communities and Canadians' knowledge of the horrors of the war and the dreadful state of post-war Europe eventually led to an overall atmosphere of sympathy toward the displaced people of the war-torn continent. Despite the overall sympathy, there were still many groups and individuals who didn't support the obstacles to immigration lessening.
The fear of a fifth column was not entirely unfounded, given that there were agents of communist allegiance in Canada at the time, looking to assert their influence. Igor Gouzenko, a Ukrainian former cypher clerk for the Soviet embassy in Ottawa, proved that there was a "vast espionage system" run by the Soviets in Canada (Luciuk 2000, Searching for Place: Ukrainian Displaced Persons, Canada, and the Migration of Memory). This was at the same time that the Canadian and other Allied governments had been doing their best to avoid upsetting the Soviets, in favour of extending the wartime friendship instead. As a result, repatriation had been the go-to policy for dealing with the refugees and displaced people, even though many refugees were specifically afraid of communist retaliation upon return. Communist supported pamphlets were distributed in the DP camps and information released in Ukrainian was banned (Luciuk). However, Canadian Ukrainians, such as Gordon Panchuk and others who were soldiers in the Allied armies, extended their influence in support of the refugees immigrating. This effort continued back home in Canada, with the emphasis being that the DPs were actually very anti-communist. 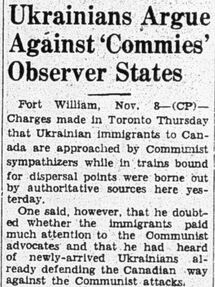 The conversation was heard and discussed across the country, including in Oshawa.

Times-Gazette. August 13, 1946.
The above article goes on to discuss the "mass meeting called by the Oshawa Branch of the Canadian Ukrainian Committee on Sunday afternoon at the Ukrainian National Hall at 68 Bloor Street East." Capt. Micheal Kapusta had just returned from Europe where he had seen the displaced persons camps. He emphasized the numerous types of useful workers, especially those from the Baltic states. Also present was Oshawa alderman Micheal Starr. Another point of discussion was whether Germans, "former enemy nationals," would be allowed in, and the answer given was a negative one.
Soon enough, the tide swiftly turned in favour of immigration.
Unfortunately, and perhaps something that could have been anticipated, arrangements for the displaced people once they came over were limited.

There was little said. They said,  Mrs. Szczepanski, welcome to Canada. I think this was because the people on the ship were all coming to Canada to live" – Victoria Szczepanski.

Many describe their journey once they arrived in Canada to be a confusing one. For example, Walter Joisten, a participant of an oral history interview for the Multicultural History Society of Ontario, said that a group of German immigrants arriving by train from Quebec City to Toronto expected to be picked up by an immigration official. Due to some misunderstanding or other, no one showed up. None of the new arrivals spoke English, and so, they left the train together as a group, just waiting. One arrangement most often made for displaced people was work contracts, but they did not know what would follow them. Following that period, they were left pretty much on their own.

We were on our own, basically. Once off the ship, we made our own way" – Bill Dranski.

The Ukrainian Weekly. July 30, 1951.
As noted with an earlier post about Oshawa's response to immigration and the immense aid offered by established cultural communities to newcomers, there were few government agencies that made aid available. By the time Justina Novak came to Oshawa in the late 1950s, she doesn't remember there being any place to go for help except in terms of employment. Victoria Szczepanski, who came earlier in the 50s, notes that her husband was able to take English lessons at a local high school. Amelia Belina-Prazmowski, participating on behalf of her late husband Lech, notes that the DPs had to do it all on their own, especially when compared to immigrants in the 1980s who had much more help. For example, in November 1981, many Polish newcomers arrived in Oshawa and had the immigration rules read out in the Polish church, St. Hedwig's. Therefore, things certainly did get easier for the new generation of immigrants, if especially because the people who had settled before them were knowledgeable and willing to help. However, immigration policy in Canada still continued to go through a certain amount of push and pull throughout the decades following the settlement of displaced people. In other words, even though the doors were thrown open in a sense, they did not consistently remain that way.
External references
​
​
"Advice to New Canadians Immigrants." Ukrainian Weekly, July 30, 1951. http://www.ukrweekly.com/archive/1951/The_Ukrainian_Weekly_1951-31.pdf.