The unsafe (and sometimes borderline exploitative) working conditions for DPs were well known at the time. In a series of articles from the year 1947, the Oshawa-Whitby Times-Gazette reports on the controversy surrounding then MP Ludger Dionne from Quebec’s Beauce district. Dionne had personally sent for a total of 100 young women from DP camps in Europe to come and work in his spinning mill, paying for their transportation himself, and contracting them on a series of terms that were strict and unusual (i.e. allegedly not allowing for any of them to marry until the contract was up, having them pay back their own transportation, etc.). Upon the arrival of one group of these young women on May 31st, the Times-Gazette reported on a protest rally organized by textile unions and their sympathizers. The demonstrators – of which there were about 200 – held signs in English, French, and Polish. One of the signs, according to the same Times-Gazette article, said the following:
On June 3rd, 1947, the article "Steelworkers Term Girls 'Slave Labour'" was printed, in which the United Steelworkers of America denounce the treatment of the Polish girl workers as a "disgrace," claiming that the government was "allowing a millionaire employer to take advantage of the misery of 'European women.'" A controversy soon followed in parliament about whether wealthy individuals should be able to bring over immigrants on their own, or if immigration is solely the government’s responsibility. Dionne’s rebuttal was published in the article “Polish Girls’ Importation Defended” on June 14th, wherein he argued that his action was a humanitarian one and that he would not change a thing if he could. However, other groups at the time argued that the government controlling immigration meant protection for the workers. One such group was the Oshawa and District Labour Council whose opinion was expressed in the local newspaper on June 11th, 1947. The Council sent an official resolution of protest to the federal government. A council member clarified that their position was not one of opposition to the settlement of DPs, but one against individual employers and private enterprises controlling immigration. 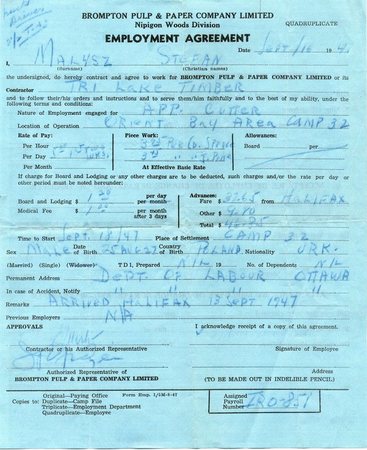 Stefan Malish's employment agreement with Brompton Pulp and Paper Company. It is interesting to note that it says to notify the Department of Labour in Ottawa in case of an accident.
Even when immigrants were sponsored through government programs and in approved contracts, tough conditions for work were the norm. Many of the participants in Oshawa Museum's oral history project state that they had very little plans of what to do after arrival to Canada, aside from fulfilling the contracts with which they had set out. For example, Jan Ciosk had a boarding house prepared for him at Kirkland Lake, Ontario where he would work in the mines on a one-year contract. Lech Belina-Prazmowski had been contracted to work in farming for two years. Afterwards, he considered factory work, some kind of trade, or joining up with the Canadian army. Victoria Szczepanski explains that her husband was contracted to work in a gold mine in Renabie, Ontario where they lived in small cabins. Similarly, Edward Kolodziejczak ended up mining in Missanabie, Ontario. Bill Dranski explains that there was no housing available, so they moved into a small shack in a mining outpost near Red Lake, Ontario. When they later sponsored his uncle's family of five to come to Canada, nine people shared a three-room house until the company granted them a larger residence.  Similarly, Mrs. Szczepanski describes a tight housing situation, with her family sharing two rooms and having no running water indoors. They went to the company store for food, as everything else was no closer than a train ride away. She was unable to speak English at the time (although her husband had learned while in Germany), and the store clerk was not altogether kind nor understanding. Stefan Malish had some English taught to him by Brompton Pulp and Paper, where he was contracted. In all, almost as soon as the contracts were up, many of the participants made arrangements to move to find safer work and more comfortable living in Oshawa, having heard of opportunities through advertising or by word of mouth.
Stefan Malish's identification card for Brompton Pulp and Paper Company in Beardmore, Ontario. The back of the card warns "safety first" and "beware of fire" and includes "useful information" such as conversion rates and guidelines for becoming a Canadian citizen.
Jan Ciosk points out some of the differences between Oshawa and Kirkland Lake, saying that it was like day and night. Kirkland only had frame houses, whereas Oshawa’s were beautiful. Kirkland had stones and much more wilderness, but was overall a bleak mining town with “lots of bootlegger houses and ladies of the evening.” In contrast, Mr. Ciosk continues to describe Oshawa as “nice, like heaven” and with a beautiful downtown. He said that he finally felt safe, after the destruction of Poland and Germany and working at the mine. Due to this, he said that “it felt like the beginning of [his] life.”