Following the end of the Second World War, homes, cities, and entire countries suffered destruction and drastic change. With the shifted borders of Europe, repatriation (a return to one's home country) was an undesirable option for most. Many of displaced persons (DPs) – those who found themselves displaced from their own countries – took the chance to rebuild their lives in foreign countries, Canada among them. One of the cities in which they settled was Oshawa, hoping to forge prosperous paths and futures for themselves and their families.

During the war, the experiences of those who would become displaced varied. Some were sent to labour camps, as was Katherine Kuzan, who arrived in Oshawa in June 1947 and told her story to the Times-Gazette newspaper. She and her sister were forced to work on a farm in the Hamburg area of Germany in 1943. They would get up at around three or four in the morning and work until nine or ten at night, getting very little food. Upon being freed by the British troops in 1945, the plan, as per the Big Three agreement, was for Ukrainians to be repatriated – to go back under the control of the Soviet Union. However, having spent time living in the USSR, Ms. Kuzan insisted that going back would be indistinguishable from those harsh conditions (and overall lack of nutrition) she experienced under the Germans. She managed to get back to a British-controlled DP camp, who helped her get to her new home in Oshawa. 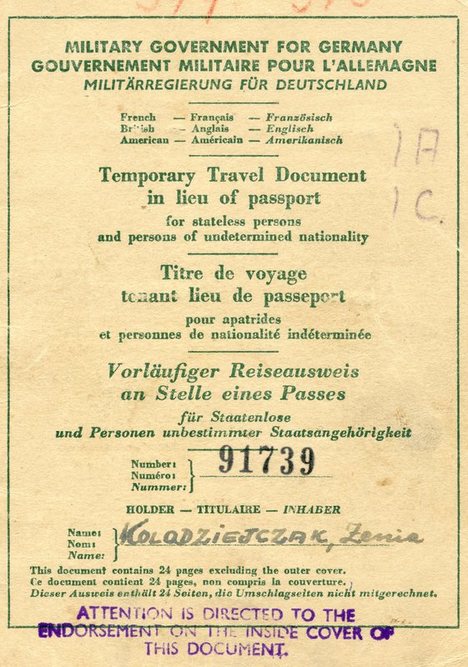 Zenia Kolodziejczak’s Temporary Travel Document for “stateless persons and persons of undefined nationality.” Issued in Germany in 1948, allowing her to travel without a passport.
Immediately after the war, with nowhere else to turn, many DPs ended up in refugee camps for months and even years. Here, they would work or learn useful skills for the workplace, as they waited for the Allied governments to finish the necessary preparations and arrangements. Eventually, Allied governments began to contact prospective workers to enter into contracts for work in mining, farming, forestry, or other industries.

Edward Kolodziejzcak, a participant in the Oshawa Museum’s Displaced Persons project, was one such worker. He and his wife, Zenia, and their infant son, made their way from the German camp in which they were stationed, to Pier 21 in Halifax, Nova Scotia. After his work in one of Northern Ontario’s mines, they ended up in Oshawa in the early 1950s. Here, like other DPs, they were able to get involved in Oshawa’s vibrant community life, as well as gradually build up their savings to buy their own home.
The Kolodziejzcaks received their certificates of Canadian citizenship in 1957 and finally, after many hardships, were able to enjoy a life free of the instability of post-war Europe.

Katherine Kuzan, in her interview to Times-Gazette, admitted that she was “still jumpy” after her experiences, but that she was positive that she would come to like her new home. Many of the participants in the DP project expressed similar sentiments of homecoming.

Canada has been very good to us. It is now our home. Whenever we go to Malta on a visit, it was and is always good to come home to Canada" – Joseph Filletti. 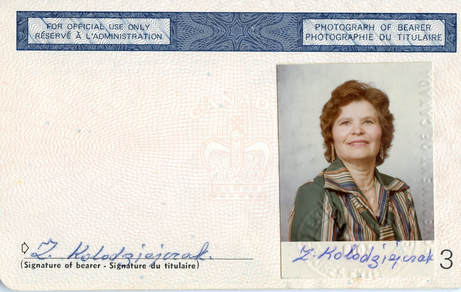 Zenia Kolodziejczak’s Canadian passport. Issued in 1978.
In seeing the image of Zenia Kolodziejcak’s impersonal document for “stateless persons” alongside her smiling Canadian passport photo, it may be easy to simply gloss over what came in the decades between. However, by sharing some of her story and that of others, those gaps can become filled.