I am grateful to Canada and Oshawa for the wonderful opportunities my family has enjoyed here. Working through the Polish Veterans, I have had opportunities to get on a first name basis with mayors and councillors. I did not choose to come here, but, given that choice now, Canada would be the only option."
– Bill Dranski.

When asked for their favourite memories of living in Oshawa, many of the participants talked about taking part in their communities – helping to build them, going to events, and the overall camaraderie shared among members of the clubs, associations, and churches.
Victoria Szczepanski describes some of her favourite memories, all relating to her family: having each of their three children, moving from place to place, and finally buying themselves a home that was then in the family for 60 years. She also reminisces on their tradition of going to the movies twice a week as a family. Another example of family tradition was Bill Dranski's family looking forward to the local summer picnic every year, but that otherwise "those first years were a lot of overtime." In making it through the tough period of initial resettlement, Jan Ciosk recalls feeling accepted and taken care of as a Canadian very early on, making memorable friendships. He also remembers events at the Jubilee Pavillion with dances and singing, as well as the very different styles of dress, like men's "zoot suits" which were popular at the time. The stark difference in dance etiquette among Canadian-born men and himself, especially around asking women to dance was another notable anecdote. Other participants  recall milestone purchases, like their first homes or their first car, which for Edward Kolodziejczak was a 1948 Green Fargo Truck. The kids would ride in the back on the way to church, he notes. Mr Dranski's first car was a "brand new Pontiac for $1600" when he was making 96 cents an hour back in July 1954. Another big moment for Mr. Kolodziejczak was when he officially became a Canadian citizen in 1957, along with his wife. 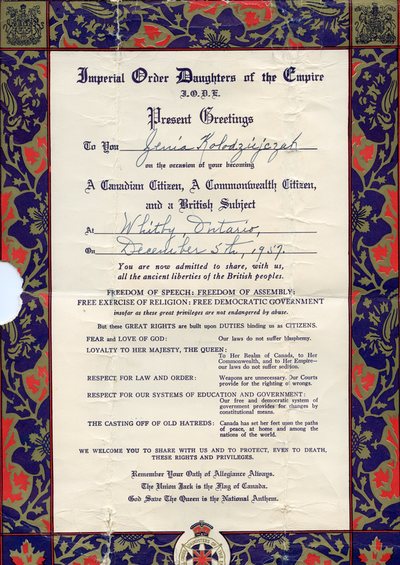 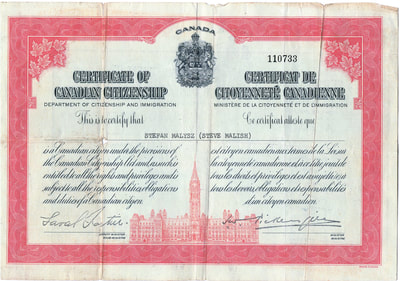 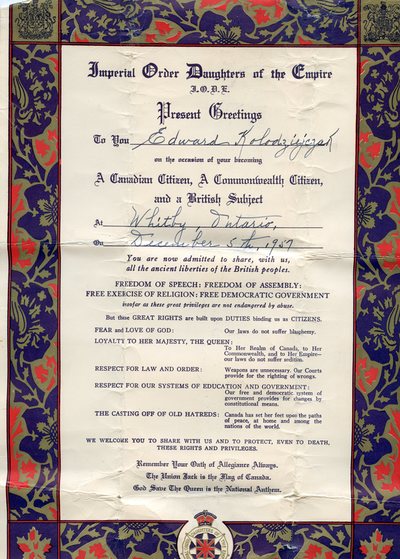 Zenia Kolodziejczak and Edward Kolodzejczak became "Canadian citizens, Commonwealth citizens, and British subjects" in December 1957 (left, right). Stefan Malish received his certificate of Canadian citizenship in March 1957 (centre).
When Stefan ("Steve") Malish came to Canada after the war, he had the bare outlines of a plan in mind, along with a hope that he would find out what happened to his family. He would eventually learn that four out of five of his brothers had passed away, or so he assumed for decades. As the Oshawa Times newspaper article reporting on this event puts it, a "chance remark" made him realize that his brother Wasyl was in fact alive and well in England. Before their reunion in Oshawa in 1982, the last time that they had seen each other was 41 years prior.

While Steve had emigrated to Canada in 1947, Wasyl had done the same to England the year later, neither knowing that the other was alive. At a wedding, an old friend had asked Steve about his brother, which led Steve to learn that Wasyl was alive. His wife, Marlene got in contact with the Durham Regional Police who connected her to the police in Preston, England. They then put her into contact with the Ukrainian Organization of London who informed Wasyl. After exchanging pictures along with elated letters, Steve and Wasyl planned a trip for Wasyl to come to Canada. They met at the airport and came to Steve's home in Oshawa:
In the following year, Steve and Wasyl Malish had an ultimate reunion with their third brother, Mike, living in Ukraine. After 42 years living in separate countries, they had been reunited. It was one happy and memorable moment for Steve Malish - one that stands out among the many he made in Canada.
Newspaper article from the Oshawa Times in May 1982: "It's a 'Brother's Day' celebration!" Brothers Steve and Wasyl Malish reunite while Steve's wife Marlene looks on (left). Brothers Wasyl, Mike, and Steve together again for the first time in over four decades (right).