The jobs available for recent immigrants in Oshawa, as told by the participants in the oral history project, including the following factories: Fittings Ltd, TG Gale Lumber Co., Houdaille Industries Inc. Malleable Iron Works, Pedlar People Ltd., Robson Leather. Many aspired to, and eventually did, work at General Motors, as it had better conditions and paid well. However, for the individuals that worked there, it was only after having been in Canada for quite a few years. After getting one of the coveted positions, a few of the participants were happy to work there until retirement. With most of the stable factory jobs, it helped to have a friend who was willing to put a good word in. Other jobs included working at restaurants, as cleaners, and generally anywhere that would hire – at least in the first few years.
Indeed, there was construction to be done on new homes, since things had been put on hold during the war. If one had a trade, they would likely continue it, such as being an electrician or a plasterer. Victoria Szczepanski’s husband actually ended up choosing Oshawa for his family as he could not find anywhere in Toronto to practice his trade (as a butcher). Available work was usually the biggest factor in deciding where to live, the other being proximity to communities.
As mentioned in a previous post, "Between Halifax and Oshawa," the experience of many of the participants was working in mines and other industries in other regions of Ontario. A few, including Jan Ciosk and Edward Kolodziejczak, were in Kirkland Lake when they saw advertisements for General Motors in Oshawa. Mr. Ciosk notes that his reason for leaving his mining job when his contract was up was because the work was too dangerous. Others heard of GM or the city in general either through word of mouth or by visiting Oshawa with friends or relatives. For example, Bill Dranski came to visit with his cousin in 1955, and moved two years later, having "decided [he had] had enough of the mines." 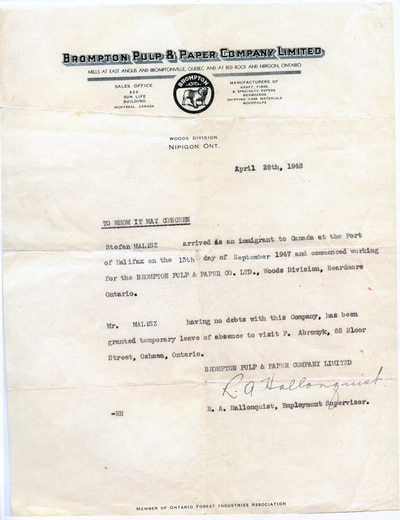 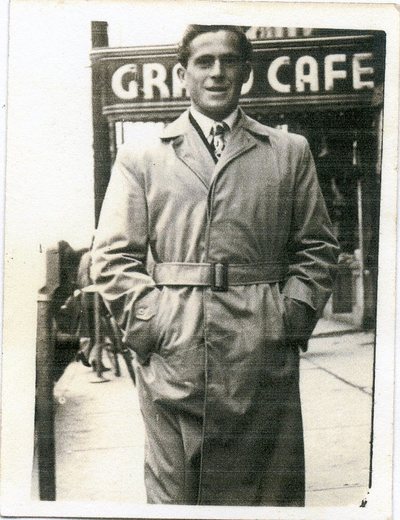 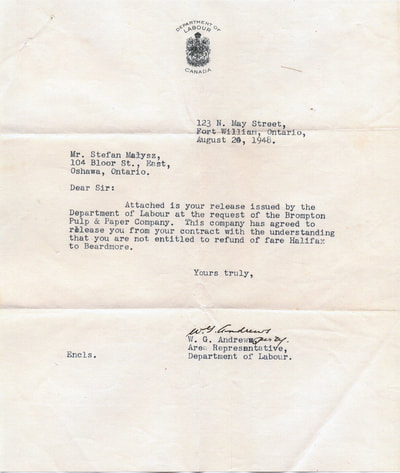 Letter from Brompton Pulp and Paper Co. Ltd. granting permission for a temporary leave of absence to Steve Malish to visit Oshawa in April 1948 (left). Mr. Malish visiting downtown Oshawa on May 1st, 1948 (centre). Letter from the Department of Labour confirming his departure from his previous company of employment (right). He and his roommates at Brompton Pulp and Paper all came together to find work in Oshawa.

Many wanted to get hired by General Motors because it was much cleaner and the pay was much better than most factories" – Marlene Malish, for her husband Steve.

Most just did what they could to keep themselves and their families fed and sheltered, so the quality of the work was not always the main concern. In fact, there has been some general speculation some factories were able to do this because they knew that the immigrant workers would not complain, for fear of getting reprimanded and fired. The logic follows that, after all, there were always more immigrants eager to work – so those who complained were easy to replace. For example, Jan Cisok’s experience at Fittings Ltd. was that it was filthy, and Steve Malish expressed a similar sentiment in that he said he needed to have a shower before leaving because of the dust. Mr. Ciosk moved on from Fittings to work for Houdaille, which had good pay but very long hours and a number of layoffs. Following that, he worked at the T.G. Gale lumberyard. Finally, in 1952, he got hired at General Motors where he said the work was not too hard and that he was treated well by his ‘very friendly Irish boss’ and that he had great coworkers. Mr. Malish was hired at GM in 1950, and stayed for 37 and a half years, retiring in 1988. Jan Drygala, another participant, also worked at GM until retirement; as did Dan Orlich when he settled in Oshawa after moving around a lot, following the work opportunities (throughout Ontario, including some time spent working for Ford Motor Company). Victoria Szczepanski’s husband wanted to work for GM, but ended up in Fittings first, eventually acquiring a position at the former where he remained until he retired. Generally speaking, work in Oshawa was safer and more desirable than the work that the participants had upon first arriving to Canada. However, it only became consistent and secure after years of switching jobs and moving around.