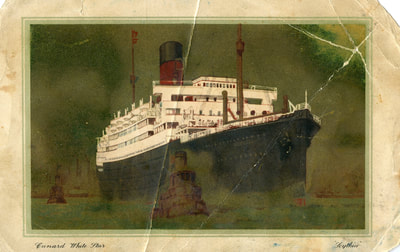 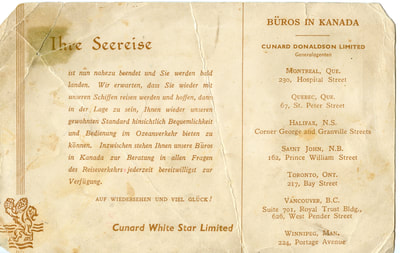 Card with the Cunard White Star line’s business information. Edward and Zenia Kolodziejzcak’s trip across the Atlantic was via the RMS Scythia.
In the Oshawa Museum’s displaced persons memory book project, the participants have been from culturally diverse European landscapes. Thus far, these have included Poland, Ukraine, Italy, Malta, Czechoslovakia, and Yugoslavia. Of course, many other countries were affected, some of which also had a blossoming cultural community in Oshawa at the time. These included Germany, Holland, Hungary, Portugal, Russia, and so on. Despite these differing backgrounds, many had similar firsthand experiences of the war and post-war journeys on the way to Canada and as prospective and new Canadians. 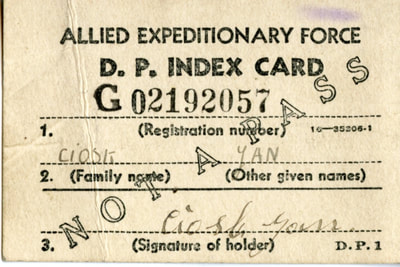 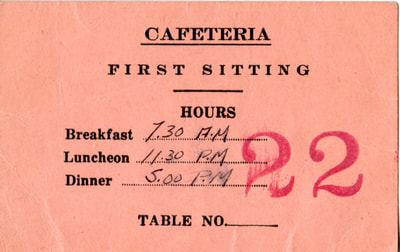 Jan Ciosk’s mementos of his journey from Genova, Italy to Halifax, Nova Scotia in late July, 1948.
Index card (left), cafeteria card (centre), third-class ticket (right).
The trip on the ships that carried over the DPs was generally less than pleasant, although experiences vary. Bill Dranski notes that the Rosa Kulm on which he travelled was relatively small, “making for a rough ride.” Departing from Bremen in Germany, they stopped in Amsterdam and in London along the way. His family was separated bunks, with him sleeping in a bunk in the single males section, but they met for meals. Jan Ciosk says that his ship’s captain was told to keep the passengers' stomachs full. The food was not so bad – they were given dining tickets for seating arrangements and for meals, and there was an orchestra/band for entertainment. Indeed, Joseph Filletti, who was a young child at the time, describes his trip from Malta as being similar to a cruise. They ate well, the captain was nice, and he went all over the ship which “drove everyone insane.” Mr. Dranski got sick for a few days, as did many others. Victoria Szczepanski’s two-year-old son developed measles and she was also ill the entire time. In a stopover in France, they were not able to get her son medical attention. They had been situated in the bottom of the ship, where the machinery was – as a few other participants describe, as well. This end of this difficult first leg of the journey was met with relief, if uncertainty, at what was to follow it. 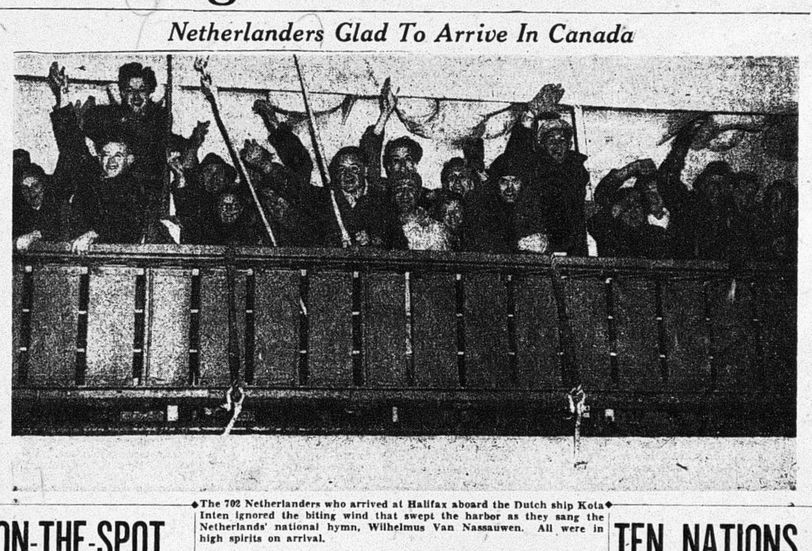 March 24, 1948 – Photograph from the Times-Gazette.
​The caption describes joyful passengers singing the national anthem of the Netherlands.
Many immigrants arrived at Halifax’s Pier 21 in the years following the Second World War, including most of the participants. A Times-Gazette article from July 31, 1947 states that the passengers who arrived at Halifax on that day “all spoke German, as well as other European tongues.” Similarly, Mr. Ciosk describes his ship as carrying people of many different nationalities, but that the Polish and Ukrainian passengers could understand each other (given their similar languages). Most DPs interviewed did not speak English at the time of their arrival, although some had learned enough to get by during their time in camps, or in contact with the English army. Mr. Filletti describes feeling wonder and bewilderment. He says they were even thinking about why they left the old country at all; just trying to talk to people and be understood.

We met a kind stranger in Montreal, who stayed with us until we found the correct train, even though neither spoke the other’s language" – Boleslaw "Bill" Dranski.

Kind strangers seem to be a common thread among many of the DPs’ experiences. Mrs. Szczepanski recalled that it was dark by the time she got off the boat and that there were some nuns present to briefly welcome the Polish people who had arrived. Others describe being basically on their own as soon as they got off the train. There was little in the ways of an official welcome from the authorities. In regard to this, Stefan Malish had believed they were second-guessing themselves about “if they made the right decision in accepting immigration.” Like most others, Mrs. Szczepanski simply got ashore, bought some food, and got on a train – spending hardly any time in Halifax. As for Mr. Dranski, his first night was spent on a train. He bought food with coupons given to the travellers by a Catholic organization. When he and his family arrived at their destination, the friend that was supposed to pick them up was not there yet. Rather than be left stranded as night fell, they were invited inside by a “nice German fella” for rest overnight, some food, and a phone to call their friend.
For many of the displaced persons, these first steps on Canadian soil were still far from what would be their permanent homes. Unfortunately, the confusion and instability experienced would not end yet, as many still had quite a journey to their new cities – one of which would be Oshawa.